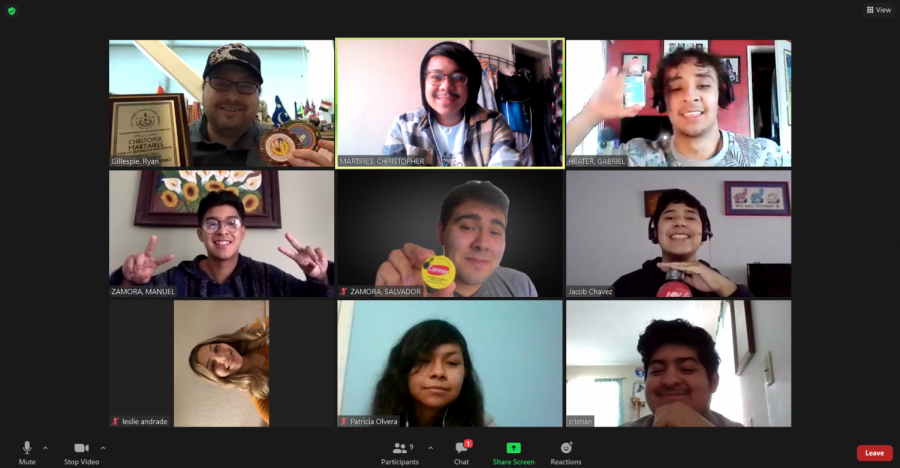 Academic Decathlon (AcaDeca) Coach Mr. Gillespie had a huge task of making sure his students were ready to challenge their knowledge by studying multiple subjects that revolved around The Cold War; subjects such as math, economics, social science, and more to truly understand the issues at the time through Zoom. However, the students worked hard to get through the competition that took place in late January to early February. They persevered despite online/quarantine pressures.

Comparing this year to previous ones, Mr. Gillespie said it was much more difficult getting his team prepared. He said, “Well it was definitely harder to really go over info and study as a group.”

“The super quiz, probably the most famous part of decathlon didn’t even happen this year,” said Mr. Gillespie.

Super Quiz is where students from most local schools compete live. There are two multiple choice questions per topic with all nine members competing in teams of three. Each team is determined by their grade point average (GPA) with Varsity being below a 3.1, Scholastic between 3.2 to 3.7, and Honors being 3.8 and above.

“We also weren’t able to do our normal cram sessions and have lunches together, or go to our HIPPs conferences, so we lost a lot of time,” Mr. Gillespie concluded.

HIPP (Highly Intellectual Preparedness Program) are workshops to help students better understand the material. Without them, much preparation was lost as RDPS members had to cram through as much of the material as possible on their own. Sometimes, their coach couldn’t be present at times so it made their studying harder than ever.

It was different and much more difficult this year with online sessions being vastly different from in-person sessions. Unfortunately, most members were new to AcaDeca and didn’t mesh well with the experience.

Patricia Olvera, a senior and member of Acadeca regarded her experience, while a tough one, was enjoyable. She said, “Academic Decathlon is something that I wish I joined before as this was my first and only year, and it was worthwhile.”

“It [AcaDeca] grew an interest towards the Cold War, which was something I didn’t find interesting before and I appreciated the atmosphere where the experience of learning from various subjects can be enjoyable with Mr. Gillespie,” said Olvera.

While enjoying her time on the team, Olvera thought she was going to be able to enjoy AcaDeca in its entirety. Unfortunately, COVID-19 had a different story for her.

“Pre-COVID, other than Academic Decathlon being active at school, I expected also to compete in different places like other high schools. However I remember being too scared to join a meeting, but as I learned about what AcaDeca was, I wanted to challenge myself to participate.

“The pandemic made it tough because it added onto the hours I would be in front of a screen, yet it did help me create a schedule and be able to talk to other people in a group setting. I am a little disappointed I didn’t get to compete in speech and interview,” said Olvera.

Marvin Madamba, a senior and  member of the team had more mixed feelings about AcaDeca, “I would describe my experience as okay, mainly because it was online, and I feel that Aca Deca relies on in-person interaction to be fun at its best.”

“I expected Aca Deca to be a fun and challenging experience,” said Madamba.

It was definitely a challenge for all the members since it was all virtual. As well, all the members had giant workloads and several after school sessions on top of AcaDeca which made it all the more strenuous.

Mr. Gillespie spoke about the team for the next competition and provided words of encouragement. He said, “The next year’s team is the first year ever where I don’t know if we will get enough people involved for a team, just like our sports team.

“I would encourage students to join, it’s hard, it’s a lot of work, but you will learn things that will help you in the real world, decathlon becomes a family, it looks great on your college application, and you can continue Rancho’s team with the most medals of any of our teams,” Mr. concluded Mr. Gillespie.

“I would recommend AcaDeca if it’s in person as it would seem to be fun interacting with others,” said Madamaba.

“I would recommend it to other students at Rancho because you get to challenge yourself, and the things you learn are useful such as giving a speech or analyzing literature, it’s important to practice those skills, and AcaDeca is a great place to do that; sometimes things that are tough have the best rewards too,” said Olvera.

Much is still unknown about whether or not AcaDeca will continue virtually, but it’s safe to say it was an experience that hopefully won’t happen again. However, it was an unique experience that  tested time, skills, and knowledge to it’s best, but it is also one that still retained the same humor and joy among peers just like previous teams before it.

Overall, although not everyone medaled, everyone did their absolute best during the competition. Manuel Zamora got a bronze medal for interview with the Team Captain Christopher Martires earning a gold medal in interview. Only the students of RDPS can determine their amounts of success and if they’re willing to compete, then they shouldn’t hesitate to reach out to Mr. Gillespie now. However, as times continue to change, the next AcaDeca team will surely have a fun and unique experience.