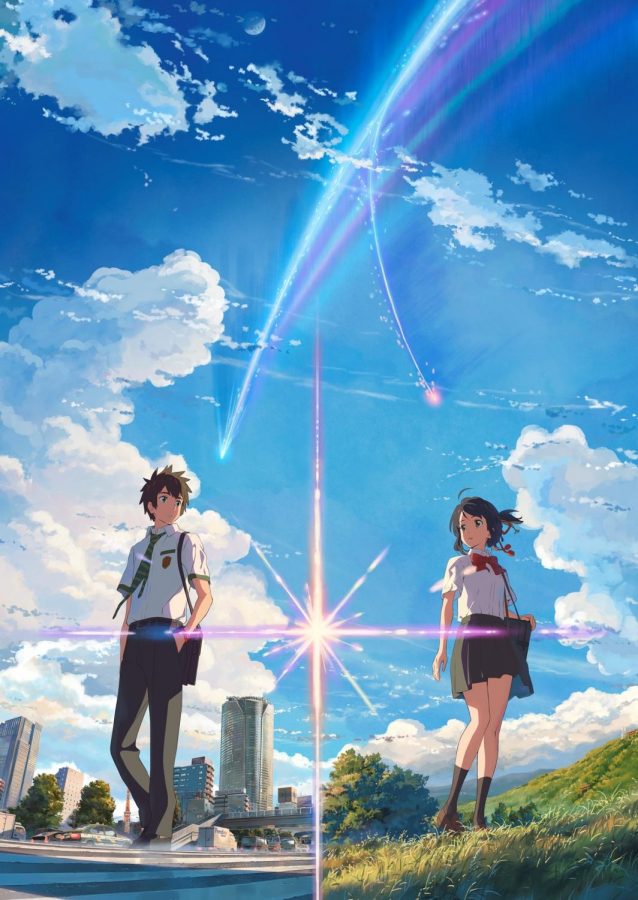 After watching and enjoying much of Makoto Shinkai’s work such as Weathering With You, Seven Centimeters Per Second, and The Garden of Words; his most popular film, Kimi No Na Wa (Your Name) has completely blown my mind. Kimi No Na Wa is a Japanese romantic, sci-fi drama rated PG-13. There are several elements seen throughout the film that elevate a seemingly cliche romantic drama into a film that’s in a league of its own. The plot is refreshingly unique without hesitating to throw twists and turns to make the viewer emotionally invested throughout the whole movie. Your Name also has a unique cast of characters while most of them seem insignificant they add a whole layer of depth to the plot. The animation is also the best that I have ever seen in a Makoto Shinkai film paired with the astounding musical score which creates an enormous impact in delivering certain scenes.

Kimi No Na Wa trails Mitsuha Miyamizu, a high school girl who lives in the rural town of Itomori, and Taki Tachibana, a high school boy who lives in the urban city of Tokyo. These characters live normal lives until one day they wake up to find out that they have swapped bodies with another person. Both Mitsuha and Taki have to adjust to living in the place of another person temporarily as they return to their bodies the following day. The body-switching between these two happens several times throughout the entirety of the film. Both Mitsuha and Taki begin to realize this phenomenon as more than a weird vivid dream and begin to communicate to each other through messages whether they write it on their bodies, journals, or through the phone. As time passes they adjust to the body-swapping and though they have never met in person they begin to develop a relationship essentially connected by a red string of fate as they seek to finally meet each other. Suddenly the swapping stops and the connection is severed as time and calamity stand in front of their reunion.

Kimi No Na Wa implements several aspects that elevate the already unorthodox plot in this romantic film. Simple aspects such as geography are acknowledged as the film realistically depicts the variations of life living between urban and rural areas of Japan as both Mistuha and Taki learn to adjust to new lifestyles during their swaps. The film also pays homage to Japanese culture as the film depicts traditional practices such as the making of kuchikamisake, (a fermented alcoholic drink made by rice and saliva) one of the older methods of making alcohol to appease the gods of the Shinto Shrine. More importantly, the film revolves around this Asian folklore of the Red String of Thread/Fate with the similar western concept of a soul mate which we mostly learn about during the rural setting of the film. This thread or string of fate is the belief that the two people connected by it are destined to be together even if the connection is disturbed or severed. During the film, we can see Mitsuha and Taki connect through this thread of fate as it is alluded to through the appearances of threads and even the red ribbon Mitsuha wears.

Though Kimi No Na Wa principally follows Mitsuha and Taki, the other side characters serve a small but impactful role through the course of the film. Tsukasa Fujii and Shinta Takagi serve a minor role as Takis’s friends but aid in showing Mistsuha (In Takis’s body) the difference in life in Tokyo along with acknowledging the difference in the dialect when Mitsuha forgets he is in Takis body which adds some comedic humor. Another minor character that serves a pivotal role in the film is Hitoha Miyamizu, Mitsuha’s grandmother. Though she is a minor character she is pivotal in displaying her traditional beliefs that help aid in our understanding of aspects, such as the red thread of fate through the tradition of thread-making as she connects them with people and the passage of time. Hitoha also reveals the relevance of the kuchikamisake at the Miyamizu Shrine.

With an astounding plot and a cast of impactful characters, Kimi No Na Wa elevates the film in its beautifully drawn animation. From beginning to end the animation throughout the film is breathtaking as every item draw is given extreme detail. The film is able to display the magic of Japanese animation as scenes such as the comet in the night sky and the sunset at the Itomori crater have left me speechless. The way the light hits the objects gives the film a somewhat magical setting. The animation also shows the beauty in the different settings throughout the film as it highlights the busy electronic city of Tokyo along with the traditional and naturistic aspects of Itomori.

The stunning animation of Kimi No Na Wa was satisfyingly complimented by its musical score composed by a Japanese rock band called the Radwimps. The music added throughout the film doesn’t just elevate it, it breathes life into the film. Some of my favorite scenes such as the sunset at the Itomori crater where the song, Kataware Doki, elevates the already heavenly aspect of this scene using a beautiful blend of piano and string instruments. The ending scene of Kimi No Na Wa still impacts me as it not only gives me closure after so much suspense; but the song played at the end, Nandemonaiya, still gives me chills as it leaves us hearing the beautiful soft voice of Nojiro Noda the Radwimps lead singer. In another song, Sparkle gives a calm and soothing presence as the piano, guitar, and vocals play a soft but uplifting melody. Other songs seen throughout the film such as Yumetorou and Zenzenzense give the film a different mood as the music is more energetic which contrasts the more soothing songs we listen to during the film as we see more rock-inspired music from the Radwimps.

Kimi No Na Wa is a Masterpiece being one of my favorite films of all time. Though this film may not be for everybody, Kimi No Na Wa is excellent in implementing Japanese culture and tradition in this romantic, almost sci-fi drama. With all aspects of this film considered, I would rate Kimi No Na Wa a 9.5/10. If you love phenomenal storytelling, breathtaking visuals, and emotional musical scores, you will love this film. Don’t miss out on this opportunity and watch Kimi No Na Wa on Crunchyroll or wherever you stream anime.