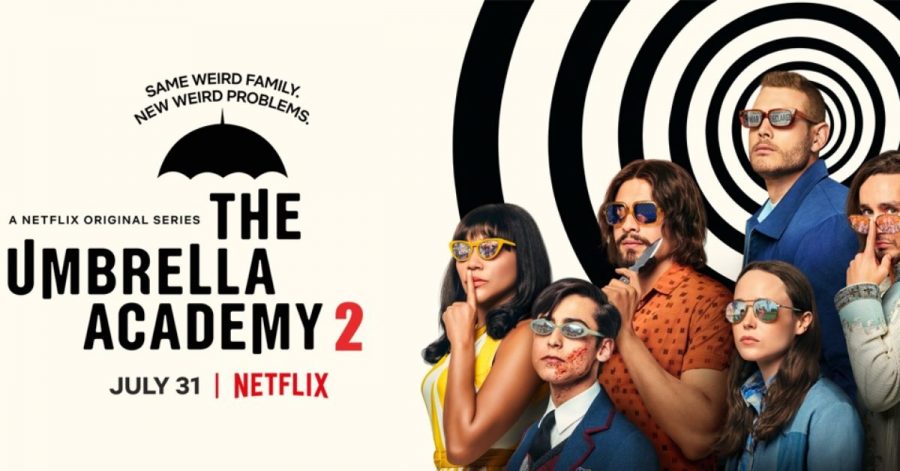 Netflix finally released Umbrella Academy season two on July 31, 2020, and it takes place in the early 1960s. In season two, the characters are trying to get back to their period and reunite their family again. Although they managed to escape immediate doom they somehow brought an apocalypse with them in the 60s. Although being dysfunctional, the family is trying to learn how to work together again. The keyword “again” as the plot feels like a repeat of the first season such as reusing some of the same aspects but applying it to the setting of the plot. However, while season one was based on the murder mystery of their father, season two is solely based on the family and their development working together again.

Season two expanded upon the family members individually and as a whole. Beginning with Diego, who is always trying to portray himself as a “lone wolf,” learned that he doesn’t need to be alone when he realizes that with the help of his family, he is stronger. Vanya was always unsure and ordinary in the first season due to her father giving up on her and making Vanya’s other sister Allison “rumor” power to make her believe there’s nothing extraordinary about herself and she was just simply normal. In season two, however, Vanya is more happy and confident in herself. As well as Allison in season two she went a whole 360 from who she was in season one as who she is in season two. Klause and Number 5 both had major growth since season one Klause went from being a drug addict to suppress his power out of fear, to becoming sober and becoming more responsible and matured as a character. Number 5 instead of keeping more to himself and being independent became more like a father figure to everyone and would do anything to help his family. Now we have Ben and I am glad that he had more of a character in season two he had more impact on the story instead of the first season where he would just follow Klause during his shenanigans.

Arianne Campos, a senior said, “I felt like the story kind of progressed slowly at first.”

“I give it a 7 out of 10 because the show was good and did blend things well but I also felt that it did go slow at first and took a while to get good.”

I agree with Campos and also give it a 7 out of 10 but I give it only a 7 because of how the story repeats itself and for its characters that should have got a better story arc.

Campos, a 12th grader said “The story included each of the characters in the story and also somehow found a way to keep the story going without making it seem like a completely different story, that doesn’t relate to the original one in season 1.”

Eric Calderon, a tenth grader said “season 2 was so good but the last fighting sequence kinda let me down just because of the anticipation leading up to it, but other than that the season was really fun to watch.”

When asked what  he would rate it out of ten, Calderon said “I would give it a 9 just because it has a really solid story and it somehow makes room to implement more sensitive topics before the end of the world.”

Patricia Olvera, a 12th grader said “I thought it was interesting because we got to see more about the characters when they are on their own again, which kind of parallels how they were in season one.”

I did like and think it was interesting seeing how the characters would be in the 60s and develop as a family.

Although I do believe that the show did well, I still believe there are flaws, such as Luther’s character as he is supposed to be the leader of the group but he is weaker as he never had his father’s love and he was even sent to the moon because his father was ashamed of what he made him. I did not like how his character turned out and wished he would have got a better redemption arc. In the end, it can be justified by Luther being dissatisfied with his life after the time jump to the 1960s, and being separated from his family. Season 2 in the end was fun and enjoyable to watch. It was fun to see the fight scenes, character development with most of the characters and expand more on the period that they’re in. All in all the show was enjoyable to watch like the fight scenes and including some history, the plot did repeat some of the same aspects from the first season, for those reasons I give it a 7, it could have been better if they could have expanded upon some peoples arc and have a new plot. The show is rated TV-14 for language and violence.